A downloadable game for Windows

Will you make love and risk death?

Assume the role of a praying mantis in a relationship. Constantly torn between their mutual love and the instinct to have sex – which could lead to the male mantis’s death – the couple are now on the verge of making a decision. Assume the role of either of the lovers, and try to keep their relationship in balance. Do your best to convey your feelings in a situation with no solution.

One playthrough is pretty short. Why shouldn’t I get a refund after I finish it?
While it’s true that a single playthrough is short, you’ll need more than one to access all the content – the total being roughly the length of a “normal” short game.
If that’s still too short for you, how many times have you put a lot of effort into something but that effort wasn’t acknowledged? It’s often difficult to understand how much time and money goes into what we experience as entertainment, but we’re sure you can see where we’re coming from. That’s why we hope you’ll consider this a fair price for the kind of experience “Don’t Make Love” is.

Can I really type anything?
Yes, technically you can, but you won’t always get a reply. This game puts you in a specific situation: a conversation about a relationship in stalemate where your partner is trying to tell you something. If you don’t take on that role, the game will ignore most of what you type, but if you try to “stick to the script” you’ll notice how the game can understand you and respond appropriately.

Why is the game only available in English?
We would love to cover as many languages as possible. Unfortunately, recognizing open input from the player also requires knowing the grammar rules of the player’s language. We are a small team, and converting the system to support more languages would be a tremendous amount of work that we couldn’t take on. If the game proves successful, however, we’ll consider this possibility.

“...this is an extremely deep dive into a moral dilemma – and one with more than a little resonance for role-reversed human fears” Rock Paper Shotgun

“With tons of different paths to clear, Don't Make Love puts up a challenge for players that may seem deeper than a couple of bugs fighting instinct. Under a thin veil of insect-love, players may find themselves in extremely deep, meaningful conversations about love and necessity.” IndieGames.com

"[The] characters are beautifully drawn, with just the right amount of earnest silliness to make you eager to inhabit the spiky bits of your chosen proustian predator. The wistful guitar music drifts through the pale light of the windy field in which these two lovers find themselves in heart rending ultimatum." NewNormative.com

Thought-provoking and emotionally charged, Don’t Make Love is a title worth trying for yourself, especially if the mood for something less gamey and more emotional is right up your alley. TechRaptor 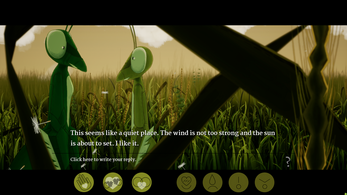 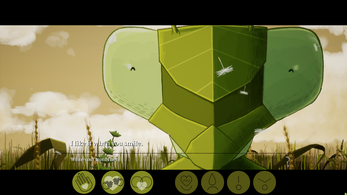 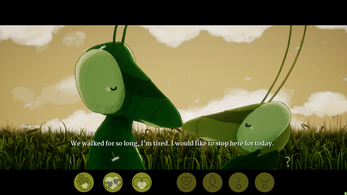